US Law Firm of the Year

The entries have been assessed and our research completed: we are now delighted to reveal our US Law Firm of the Year for the 2020 Legal Business Awards.

This award highlights the US firm that has made the greatest progress over the past year in advancing its strategy, improving financial performance and winning instructions, particularly in the City. A large international presence is not a prerequisite for consideration for this award, although the judges will be looking for strong evidence of success in those foreign markets where the firm has offices.

Latham impressed the judges to beat rivals in this category after posting a second consecutive year of double-digit growth; a revenue surge to $3.768bn in 2019 and profit per equity partner of $3.78m. If that wasn’t enough, London growth exceeded the global rate, with the City office standing out as one the most potent European practices of any US player.

Noteworthy mandates included Spotify’s groundbreaking direct listing on the NYSE, advising the lead committee of creditors of Steinhoff on a €9bn restructuring, EQT on the financing for the negotiations to acquire Nestlé Skin Health for $10.2bn and advising CPPIB in the £4.77bn acquisition of Merlin, then the biggest ever take-private deal in the UK.

Since 2000, Latham has donated more than 3.5 million hours of legal services, worth $1.6bn, pro bono, while last year 93% of its lawyers worked on pro bono matters, with 14,000 hours donated in London across 95 new matters, including improving the legal outlook for stateless persons.

Latham earmarked London as a strategic opportunity some time ago and has been building its strength across all major practice groups in line with the vision. ‘The league table positions the firm occupies, the deals it has done, the clients it has won, and the prominent partners it has attracted are all testament to its continued growth and success in one of the most world’s most competitive legal markets,’ the firm declared.

In October 2019, Paul Hastings moved into its new London office, taking the top two floors of 100 Bishopsgate, testament to the firm’s headcount and revenue doubling in the past five years.

Other highlights include Paul Hastings’ CSR and diversity work, as well as marquee mandates including advising CashEuroNet UK and US parent company Enova International on QuickQuid’s administration and the arrangers on a $3bn finance package underpinning Bain’s acquisition of Kantar from WPP.

Akin Gump has built on its dramatic growth in the City in recent years since its acquisition of Bingham McCutchen’s London practice in 2014 with another solid financial year in 2019, with London revenue up to over $125m against a global revenue increase of 6% from $1.07bn to $1.135bn.

In another robust year for Boston’s Goodwin, its ever-expansive City arm has seen turnover lift 11% to $74m amid a year of aggressive investment. Notably, the firm’s City lateral tally since the start of 2019 also stood at 11, chiefly in the tech practice, and mainly from rival in the space, Taylor Wessing.

London outpaced global growth at Milbank, with revenue reaching $171.2m in the last financial year, an increase of 10% on $156m in 2018. Over the last five years, Milbank has upped City revenue an impressive 55%.

Disputes heavyweight Quinn has continued its impressive growth in the City, with 2019 revenue at the firm’s London office increasing 20% to £100.6m. The firm also saw profits rise 11% to £67.2m, putting the office’s profit margin at 67% and cementing its place as a market leader among litigation-only practices in London. 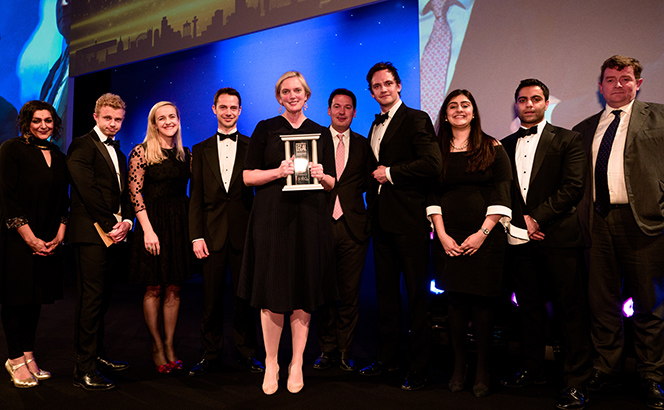 2018 financial results continue a blistering run for the firm both globally and in London – City revenue was up 7% to $350m, as firm-wide revenue increased 14% to break the $2bn mark. Sixteen London laterals included infrastructure partner Simon Caridia from Herbert Smith Freehills as the firm ramped up its NY-London focus and ambitious 2020 strategy to go toe-to-toe with the Magic Circle.

Cooley’s London branch recorded another year of double-digit revenue growth as its top line grew 16% to $66.7m, four years after its launch. For the second year in a row, the City office outpaced the Palo Alto-bred firm’s global revenue growth, as the latter rose 14% from $1.07bn to $1.23bn. The firm began the new year with another office launch, opening its first continental European base in Brussels.

Goodwin continues its meteoric rise in the City and around the globe. Its London arm grew at more than three times the pace of the firm globally in 2018, hitting $66.8m in the year in which the firm launched a European life sciences practice. The eye-catching 58% growth in London from $42.3m came as Goodwin’s global turnover rose 16% to $1.2bn and profit per equity partner was up by
14% to $2.46m.

Milbank celebrated its 40th anniversary in London by posting a 25% revenue hike for its City branch to $156m from $125m in 2018. It kicked off 2018 with a number of lateral hires, including a four-partner restructuring team from Cadwalader, and followed that with the hires of Apostolos Gkoutzinis and colleague Rebecca Marques from Shearman & Sterling.

In 2018 MoFo’s UK revenue grew 29% to £24.72m in a significant year for its London office, which has in recent times enjoyed considerable success, as has the wider global business. A clear sign of this was the news that the firm had hired one of the City’s most respected finance veterans, Chris Kandel, from Latham & Watkins.

2018 was yet another strong year for the City arm of Paul Hastings, which has seen headcount and revenue double over the last five years. The results also come after the firm made aggressive hires in the last 12 months, with former DLA Piper private equity partner Anu Balasubramanian and ex-Linklaters M&A partner Roger Barron the standout recruits.