Real Estate Team of the Year

After much back-and-forth between the judges in a keenly contested category, we are now delighted to reveal the winner of Real Estate Team of the Year for the 2020 Legal Business Awards.

For this award, judges looked for a standout example of real estate-related work, including financing, development or construction, or cases and transactions in planning, environment and regeneration.

These three firms collaborated to advise the joint venture between Permodalan Nasional Berhad and the Employees Provident Fund on its £1.58bn acquisition of the commercial assets within Phase 2 of the Battersea redevelopment project.

Once redeveloped, the iconic art deco power station building will house Apple’s new European HQ and a private members’ club, a 2,000 capacity events venue and over 250 residential homes along with luxury retail, food and beverage and leisure accommodation.

The deal focuses on one of London’s largest, most hotly-anticipated regeneration sites. Over the years, the site has been subject to a number of unsuccessful redevelopment attempts due to the significant challenges posed by the site – so much so that it has been described as being the ‘Everest of real estate’ on the basis that it is considered to be one of the toughest redevelopment projects in the world, with a number of developers having tried and failed to conquer it.

The transaction is anticipated to comprise one of the UK’s largest-ever single-asset real estate transactions. Linklaters, led by Patrick Plant, advised the joint venture purchaser; the seller (the owners of Battersea Power Station Development Company) was advised by an Addleshaw Goddard team headed by Leona Ahmed; with Norton Rose Fulbright (Dan Wagerfield and Dan Kennedy) acting for the seller on the financing aspects.

No individual firm stood out as contributing to the overall success of this deal: there were a number of different and complex parallel workstreams, which demanded fluid co-ordination between all three firms.

This truly collaborative process meant this entry stood apart. Christopher Gilchrist Fisher, senior director of CBRE Global Investors, said: ‘Without the co-operation and shared objectives of all involved, this transaction would not have happened. Deals of this level of complexity involve managing the multi-layered requirements of various stakeholders. They demand a new type of lawyer – one who works with their respective clients for the future success of the project, above individual requirements, and in the face of short-term gains.’

CMS fielded a multi-disciplinary team, led by partners Gareth Saynor and Peter Winnard, comprising over 35 advisers in Sheffield, Manchester, London and Edinburgh, to deliver this deal for Vita. This was a complex transaction requiring significant strategic advice at every stage and was of huge significance for the client, allowing it to scale up its growth and bring more innovative brands to market while continuing to deliver high-quality student accommodation. CMS played a pivotal role in helping the client to achieve its goals.

Advising Grange Hotels on the sale of part of the reorganised group to Queensgate Investments for some £1bn, a portfolio comprising four upscale hotels offering around 930,000 sq ft of real estate.

Advising The Royal Parks on a novel contract for events held at London’s major parks. With government funding diminishing, TRP was faced with raising over £30m annually and events are seen as key to its long-term financial viability.

Advising South Tees Development Corporation on the acquisition and regeneration of TATA Steel’s former steel works on Teesside; this was the first transaction involving a mayoral development corporation outside of London. 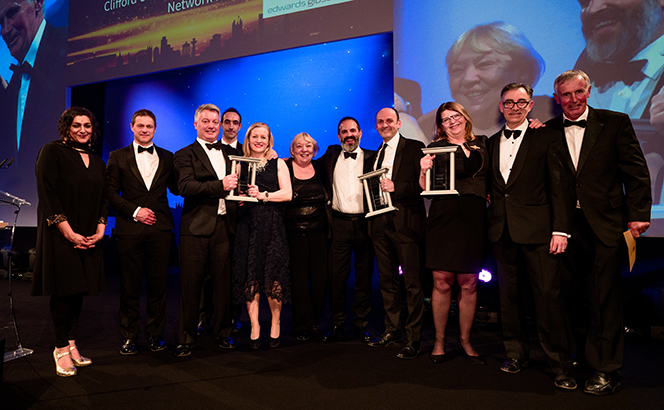 Described by the FT as ‘one of the largest ever UK real estate deals’, this trio of legal teams combined seamlessly on Project Condor – Network Rail’s sale of its commercial estate, comprising 5,200 properties, for £1.45bn to Blackstone and Telereal Trillium.

Law firm and in-house team collaborated fully on the Albert Island regeneration in The Royal Docks, one of the last big GLA sites awaiting transformative regeneration. Both combined throughout particularly on the procurement process, which involved an unusual obligation on the development partner to build and open a new shipyard.

Advising the PRC Government on relocating its embassy to the former Royal Mint Court site. The deal raised a number of unusual legal risks and challenges, including bespoke key documents in English and Mandarin, a joint venture partnership, and issues surrounding privacy and security specific to the PRC.

Advising Hodson Developments on the acquisition, financing and development of 5,750 homes in a substantial part of a development site at Chilmington Green, Ashford. The project had multiple parties, complex ownership arrangements and a bespoke agreement was needed to please all parties.

Leading the advice on Allied London – a £1.3bn forward funding with Aviva and development of Enterprise City in Manchester. The firm has been involved in every aspect of the project: pre-lets/sales, planning and construction advice, major constraints resolution and multiple finance arrangements.

Advising InTown Group on the acquisition of 20 UK hotels and the associated management platform from Apollo Global Management for more than £700m – InTown’s first venture into the UK market. The project involved 50 lawyers across 11 different areas covering the deal.

Advising Fresh Wharf Developments on concluding a deal for the redevelopment of the northern part of Fresh Wharf Estate in Barking, which will see homes and commercial units built on a contaminated site. An agreement was first signed between Fresh Wharf and developer Countryside in 2005 and has been varied a number of times since.