Private Equity Team of the Year

After much back-and-forth between the judges in a keenly contested category, we are now delighted to reveal the winner of Private Equity Team of the Year for the 2020 Legal Business Awards.

The winner in this category demonstrated an ability to land the most significant mandates in an incredibly competitive market for private equity-backed deals. Judges looked for evidence of an ability to move with the market and stand out from competitors in the most eye-catching transactions.

The deal was symbolic of a market that saw US money pile into UK assets, with the weakness of sterling attracting continued interest from sponsors, even as Brexit threatened to put off investors.

In July 2019 the Weil team, led by partner Marco Compagnoni, advised Bain on the acquisition and financing, coordinating input from finance, IP/IT, tax, antitrust, and Weil lawyers in the US, Germany and France. The deal saw WPP retain a 40% equity stake in London-headquartered Kantar and called for the Weil team to offer strategic advice on all aspects of the deal, including due diligence, M&A, shareholder arrangements, carve-out and bank/bond financing.

Particularly complex was the carve-out and separation, legally and operationally, of Kantar from the WPP group.

Kantar has around 350 legal entities, many of which are not wholly-owned by WPP, meaning that various shareholder, regulatory and works council processes needed to be followed to extract them.

Kantar shares its IT infrastructure with WPP, which is outsourced to IBM under a long-term arrangement. The team was instrumental in negotiating the outsourcing arrangement required to continue this post-completion. Weil won accolades from WPP for its ‘approach and ability to see the real value issues’ and the ‘top tier advice, strategically as well as technically’ that it provided to Bain Capital.

The financing of around $3bn of EUR and USD loans and bonds required complex negotiations and bespoke provisions. The 11 banks started with a range of views and through lengthy negotiations, the Weil team brought them to a consensus on the approach that worked for Bain and WPP.

Clifford Chance impressed the judges with its advice to longstanding client KIRKBI, the investment vehicle owned by Lego’s founding family, on its consortium with Blackstone and pension fund CPPIB to acquire Merlin Entertainments. The all-cash, £6bn deal involved KIRKBI becoming the largest shareholder in the consortium, with a 50% stake.

The offer valued Merlin, Europe’s number one and the world’s second-largest visitor attractions operator, at £4.77bn, with CC leading on the scheme of arrangement leading to the successful offer and shareholder arrangements, which took into account each consortium member’s investment objectives and strategic interests.

Acting for TPG on its takeover of the assets of the Abraaj Group’s $1bn Global Healthcare Fund, after the assets fell into limbo as the Middle East fund collapsed amid mismanagement and corruption allegations.

Advising CVC on its £200m minority equity investment in Premiership Rugby, a deal crucial to top-tier English rugby clubs, many of which are unprofitable, and which came under intense scrutiny from numerous stakeholders.

An active fund formation team that helped raise over $150bn in 2018 alone, representing 30% of all private capital funds raised globally. It recently advised Permira on the launch of Permira VII, which closed with €11bn of commitments.

Advice to Standard Chartered Bank on divesting its private equity business via a £790m MBO to Affirma Capital, a new PE firm set up for the purposes of the disposal, backed by ICG Strategic Equity. 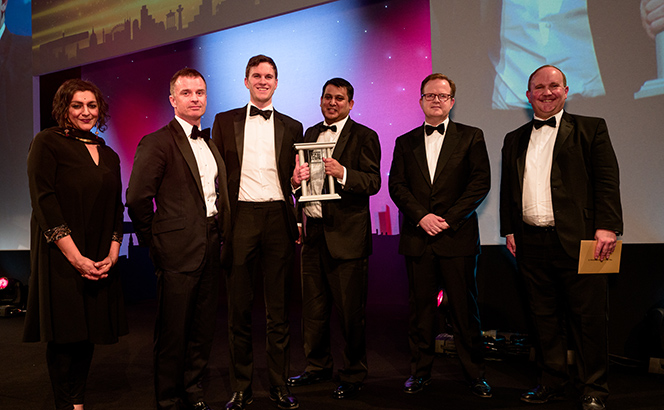 In a year bookended by the arrivals of David Higgins and Adrian Maguire from Freshfields in London, standout mandates include representing funds advised by BC Partners on its agreement to acquire majority ownership of United Group from KKR. This represented one of the most significant private equity deals to date in the CEE region.

Advising Carlye and GIC on the €10.1bn acquisition of AkzoNobel’s specialty chemicals businesses, which was achieved through a complex carve-out transaction. The deal involved teams working out of London and Washington and raised €6.5bn in debt financing.

Advising Blackstone on its €1bn acquisition of a majority stake in Luminor Bank, the Baltic region’s third largest bank, from DNB and Nordea. The deal has been touted as the decade’s largest majority-stake acquisition of a universal bank by a private equity fund.

Advising Warburg Pincus and other investors on their $1.25bn investment in Airtel Africa, a telecoms and mobile money services provider. The deal involved legal due diligence across 14 jurisdictions, and an investment structure and contractual framework that will help facilitate a future IPO.

Advising Partners Group on the parallel simultaneous acquisitions and subsequent merger of Ammeraal Beltech and Megadyne Group for a combined value of €2.5bn. The Ammeraal buyout was achieved via a competitive auction process, while Megadyne’s acquisition involved a pre-empt of a proposed Q1 2019 sale process negotiated bilaterally with its sellers.

In a bumper year that included acting for Bridgepoint and management on the sale of Pret A Manger, a major highlight was advising TA Associates on its complex £600m carve-out acquisition of asset management business Merian Global Investors, from Old Mutual Wealth.

The firm has established a strong relationship with CVC Capital Partners, as demonstrated by its advice on a number of deals including the £602m IPO of the cybersecurity provider Avast on the London Stock Exchange. The listing represented 25.3% of the shares in Avast, and valued the company at £2.38bn.