Finance Team of the Year

After much back-and-forth between the judges in this keenly contested category, we are now delighted to reveal the winner of Finance Team of the Year for the 2020 Legal Business Awards.

The winner of this award operates at the cutting edge of the finance industry and has provided one standout example of work taken from a wide range of disciplines, including bank lending, acquisition finance, structured finance, project finance and debt capital markets.

Clifford Chance (CC)’s advice to NatWest Markets on the first bond switch from Libor to Sonia turned the heads of judges, not least as it saw Associated British Ports (ABP) become the first sterling borrower to switch its floating rate bonds over to the new rate.

CC laid claim to being ‘uniquely placed’ to advise the solicitation agent on this novel deal due to its membership of the Bank of England’s working group on risk-free rates, not to mention its work in the Euro legal working group on Libor reform. From such a favourable position in the market, CC has subsequently advised a number of other issuers and agents on the restructuring of Libor-linked bonds to reference Sonia.

The transaction saw CC’s winning team, led by Paul Deakins, advise the solicitation agent, NatWest Markets, as the UK’s biggest port operator successfully delivered a consent solicitation process on £65m floating-rate notes due 2022 – flipping to Sonia – the rate chosen by regulators to replace Libor – by the end of 2021.

ABP was the first company to amend legacy debt accordingly and establish a model for other issuers to follow. The change in interest basis was intended to minimise risks of value transfer for both the borrower and investors, and no consent solicitation fee was paid to investors.

ABP has exposure to Libor across a range of financial instruments including revolving credit facilities, term loans, US private placements, interest rate swaps, cross-currency swaps and listed bonds. In September 2018 the company started exploring a possible restructuring of its Libor-linked floating rate notes and held discussions with interested investors on the proposed methodology prior to the public launch of the consent solicitation.

As the transaction was the first of its kind, ABP made the legal documentation freely available to the market so that others could follow suit, and the fact that the pricing approach has been used in a number of sterling deals since is testament to its quality.

A pioneering attitude was the order of the day for the Bakers team as it advised Saudi shopping mall giant Arabian Centres Company on its $748m IPO, the first-of-its-kind in Saudi Arabia with a full international offering, including an offering into the US under Rule 144A.

The team, jointly led by Robert Eastwood and Karim Nassar of the equity capital markets group of legal advisers in Riyadh and EMEA head of capital markets Adam Farlow in London, had to draw on all its resources to tackle regulatory challenges with novel legal solutions and innovative problem-solving.

With an implied market capitalisation of $3.3bn, not only was this Saudi Arabia’s biggest IPO since 2015, it claims to have included the largest-ever syndicate of banks of any Saudi IPO, including several international banks that had never before had a role in that market.

Representing Kazakhstan’s national rail company on a bond issue that was groundbreaking on several levels, including being the first corporate bond listed on the Astana International Exchange and the first combined offering document for dual-listed securities under its rules.

Advising the International Finance Corporation and the City of Belgrade on a landmark PPP project to redevelop the city’s existing waste management infrastructure, the first project of its kind in Serbia.

Acting for the joint venture company Trivium Packaging on a $2.85bn bond offering, the proceeds of which would be used to finance the creation of the JV out of a combination of Exal Corporation and Ardagh Group’s Metal Food & Specialty Packaging businesses.

Advising Mantos Copper on a comprehensive $250m financing package to expand production at its Mantos Blancos copper mine in Chile. The deal featured three facilities that were based on offtake contracts, the largest of which was a $150m senior secured facility from the Glencore subsidiary, Complejo Metalurgico Altonorte. 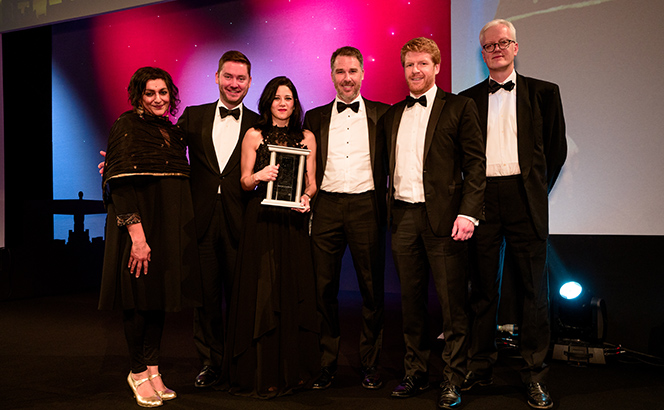 Assisting Comcast on the financing for its £30.6bn acquisition of Sky, involving a £16bn bridge facility, a new £7bn term loan, and an amendment to its $7bn revolving facility. The deal was made more complex given the publicity surrounding the competitive auction process required for its takeover battle with 21st Century Fox.

Representing Clifford Capital as the sponsor, manager and subordinated note investor of the first infrastructure project finance securitisation in Asia. Such securitisations are rare, and this new asset class allows institutional investors access to infrastructure debt in Asia-Pacific and the Middle East.

Advising Neptune Energy Group Holdings, the Carlyle Energy Fund and CVC Capital Partners on the reserve-based financing for the acquisition of ENGIE E&P International for $4.7bn, in what was the largest-ever EMEA private equity-backed upstream acquisition.

Acting for UBS and the other joint bookrunners on the highly complex and innovative $500m convertible bond issue by Swiss Re, which was secured over an equivalent series of bonds issued to an SPV. This included hedging arrangements with certain financial institutions to offset its share delivery obligations under the bonds.

Advising Ørsted on the $3.5bn financing arrangements for the Hornsea 1 offshore wind farm, including the disposal of a 50% interest in the 1.2GW project to the global infrastructure fund, GIP. This is the largest single-project financing to date in the global renewable energy sector.

Advising Greece’s four systemic banks – Alpha Bank, Eurobank, National Bank of Greece, and Piraeus Bank – on their groundbreaking non-performing loan service agreement with the Italian credit institution doBank. The deal helped establish a servicing platform for the management of €1.8bn in loans to over 300 Greek SMEs.